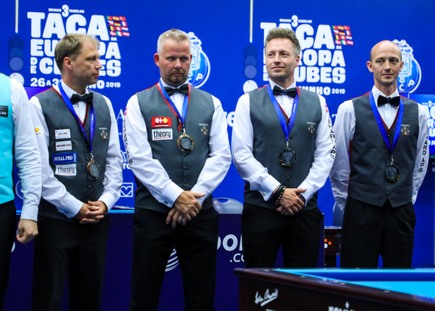 The blue and white home team was led to victory by Dick Jaspers and Dani Sánchez. The miracle man Sánchez in the Saturday matches now started a little less vigorously in his match with Brian Knudsen. Dick Jaspers was facing Dion Nelin, not on his best this time, at the other table. The result: there was rarely any tension in the match. In the Danish team BK Grøndal, only Jacob Haack Sörensen showed up at the level that he has shown in the entire tournament. Joao Ferreira restrained Michael Lohse, but actually all eyes were on Jaspers and Sánchez. PORTO – The team boss of the new European champion radiated the happiness of his players on the podium in the FC Porto arena. The French team BC Baulois, better known as La Baule’s dream team, captured the European Cup for teams in the battle with the main competitor FC Porto on the early Portuguese Sunday evening. Joël Switala, an amiable Frenchman with a mission on the international billiard stage, held up the Cup in front of his four players as the proud and emotional winner. The golden team, with Frédéric Caudron, Jérémy Bury, Jean Paul de Bruijn and Mikaël Devogelaere, defeated FC Porto’s home team in the final. The leader of the team, Frédéric Caudron, was the undisputed star player of ‘les bleus’ with two victories over Dick Jaspers and a glorious final run of 25. The decisive winning point came from the Dutchman Jean Paul de Bruijn.

The French champion, who may bring the European Cup to La Baule for the first time, played a flawless tournament in the Portuguese port city. The overall victory was the result of the strong collective, which dominated other famous teams such as FC Porto, FBN Tekstil and BK Grøndal on the final days. The Turkish defending champion was defeated in the semi-final, in the final match, BC Baulois was sovereign against FC Porto. Frédéric Caudron was the locomotive of the team with an average of 2.272 over the five matches this weekend and 3.904 in the two matches on the final day. The Belgian and Dutchman Jean Paul de Bruijn remained unbeaten in the finals. Jérémy Bury played 1.456 over the two final days, Jean Paul de Bruijn 1.422, Mikael Devogelaere 1.219.

The match for European gold in the FC Porto arena focused most of all on the match between Frédéric Caudron and Dick Jaspers on center court. The Dutchman launched the clash with a furious start, a run of 12 (14-0 in two innings), another 8 in the sixth inning (23-7). Caudron’s miraculous finish turned it all around with runs of 11, 13, 6 in a row (30 in 3) and finally the winning 3 points for the 40-34 score in in 13 innings. Jérémy Bury was leading against Dani Sánchez all the way, Mikael Devogelaere controlled the match with young Portuguese Ferreira and Jean Paul de Bruijn was the player who secured the final triumph. The Dutchman was still attacked by Rui Costa (run of ten), but was the first to cheer victory after the final run of 5: 40-34 in 28. For the French team, it was the signal for a short dance of joy in the arena.

Frédéric Caudron started the final gala with a match against Tayfun Tasdemir in the semi-final, which he won after a mighty run of 25 (!) to the end. The discussions going around afterwards were surely interesting for the future. Should there be a change of rules world wide to allow players, who finish a match with a high run, continue until they miss? That could, for example, result in a world record best run.

Two Belgians came very close to that magical 28 in one week: Eddy Merckx in a tournament in Belgium with 26, Frédéric Caudron now in Porto with 25. We must say that Merckx missed his 27th carom during the match, Caudron had to stop his run when he made his 40th point. New rules, for sure, would give more chances to improve the record.

This website uses cookies to improve your experience while you navigate through the website. Out of these, the cookies that are categorized as necessary are stored on your browser as they are essential for the working of basic functionalities of the website. We also use third-party cookies that help us analyze and understand how you use this website. These cookies will be stored in your browser only with your consent. You also have the option to opt-out of these cookies. But opting out of some of these cookies may affect your browsing experience.
Necessary Altid aktiveret
Necessary cookies are absolutely essential for the website to function properly. This category only includes cookies that ensures basic functionalities and security features of the website. These cookies do not store any personal information.
Non-necessary
Any cookies that may not be particularly necessary for the website to function and is used specifically to collect user personal data via analytics, ads, other embedded contents are termed as non-necessary cookies. It is mandatory to procure user consent prior to running these cookies on your website.
GEM & ACCEPTÈR